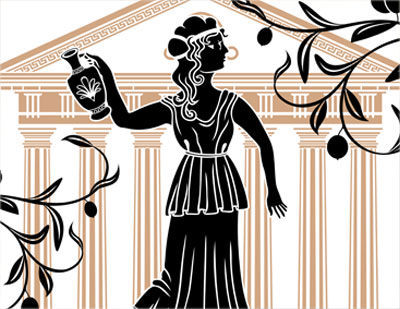 The Ancient Greeks were lovers of physical beauty. They sought new ways to improve their appearance through nutrition, athletics, cosmetics and staying in tune with the body’s natural aging process.

Cosmetics were an important part of the life and culture in Ancient Greece. The word “cosmetic” comes from the Greek word “kosmetikos,” meaning a sense of harmony, order and tranquility. Most beauty products in ancient Greece were made from ingredients found in their natural environment such as olive oil and honey.

Ancient Greeks created many of their own skin care products and treatments using local, natural ingredients. They made skin-softening lotions from a combination of oils and herbs. One of the most popular treatments involved mashing up a paste of fresh berries and mixing it with milk. The paste was massaged into the face and left to absorb for several hours before being removed. Grecian women may have invented the concept of a facial mask!

Some Ancient Greek Ingredients that are still used today are:
1) Olives & Olive Oil
Olives. They were stone grounded and used as a facial mask to exfoliate. Olives have a high mineral content and contain antibacterial and antifungal properties as well as anti-aging actions.

Olive Oil. Ancient Greek women were the first to use olive oil as a moisturizer. Still today, it helps revitalize dry skin and contributes to the cell renewal process.

Because olive trees were naturally abundant in Greece, olive oil became the lifeblood in ancient Greek culture. Initially it was extracted for making fragrance oils but later the Greeks began using it for food, lighting, pharmaceutical purposes and cosmetic use. It became a staple for daily personal hygiene and body care. Especially, for Greek women, it was used as a beautifying skin cleanser, and an after-bath moisturizer.

2) Honey. The use of honey as a cosmetic in Ancient Greece dates back
to 5000 BC, when skincare was based on bee products, goats milk, herbs, and olive oil.
Honey was used to make facemasks and body scrubs. It has anti-inflammatory actions and helps shed dead skin cells. Ancient Greek women enjoyed honey and milk baths as part of their nightly beauty regime. Today it’s still a major ingredient in contemporary Greek beauty products.

O3) Milk & Yogurt
Milk. Widely used in Egypt and ancient Greece because it had softening properties. However, it was considered a luxury item and only the wealthiest
could afford it. A combination of milk & honey were used in many cosmetic and anti-aging preparations.

Yogurt. Greek yogurt was considered a miraculous ingredient because it soothed and nourished the skin. It was primarily used to relieve the skin against sunburns. Lactose, proteins, vitamins, and minerals are all found in yogurt, which can soothe sunburn and shed dead skin cells.

Greeks considered roses as the “queen of flower”. They used its oil and water to soothe and nourish dry skin. Rose water cleanses, hydrates and is packed with nourishing vitamins A and E. It also prevents aging by reducing wrinkles and tightening skin pores.

5) Sea Salt
Ancient Greeks along with Egyptians used sea salt to exfoliate, rejuvenate and enrich their face and body with natural minerals. Sea Salt & sugar were mixed with olive oil as a popular exfoliate.

Sea salt is also a natural detoxifier, as the salt absorbs the toxins from the skin. It increases circulation and has antiseptic effects. It also softens the skin without a greasy feeling and reduces fluid retention.

Ancient Greeks and Romans both used warm seawater as a therapy to help them relax. This is now called thalassotherapy, a word derived from the old Greek word thalassa, which means sea.

These ancient ingredients are still used today. With modern technology and science they are mixed with other nutrients and ingredients in safe increments making them extremely beneficial, achieving multiple benefits for healthy, beautiful skin!

For your health and beauty, YASOU!

This was a very interesting article ! I loved all the historical knowledge , very fascinating !!

Thank you Daniela -glad you enjoyed it! Don’t forget to sign up for our enewsletter so you can receive more interesting tidbits and YASOU promotions.

Did women in Ancient Greece put on makeup and have a skincare routine?

[…] terms of taking care of the skin, Ancient Greek women certainly had impressive DIY skills. Olive oil was an essential ingredient in Greek skincare. In products today, olive oil is still used to […]